► IN VIA DI DEFINIZIONE

NOT EVERYTHING IS BLACK 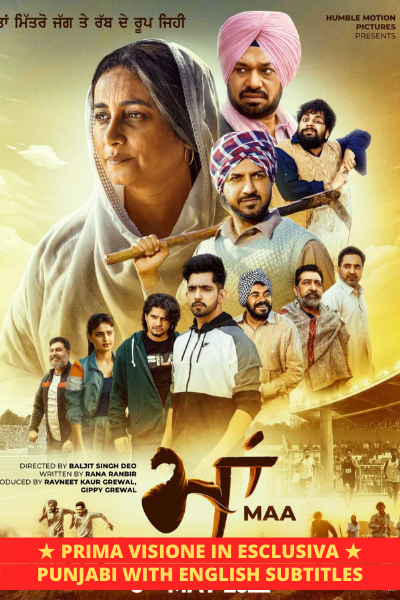 PRIMA VISIONE IN ESCLUSIVA
As the title of the movie tells itself, the film will tell the story of the struggle of a mother and how she spends her life struggling and fighting for her family. Surely the film will be a precious gift to all mothers. The makers of the movie selected the release date according to its theme, and now it is confirmed that the film will release theatrically on May 6, 2022, just a few days prior to Mother’s day, first look poster is looking intriguing.
Directed by Baljit Singh Deo, Maa is an upcoming Punjabi film, which is going to be released soon. Deo has directed many music videos as well as films in the past. The film stars popular Punjabi actor, singer, filmmaker Gippy Grewal in the lead role. He collaborated multiple times with director Deo in the past, for films and music videos. Gippy’s  recent release was Punjabi comedy film Shava Ni  Girdhari Lal, in which Deo served as Cinematographer along with Daljit Dosanjh, Sonam Bajwa and Shehnaaz Gill starrer Honsla Rakh. Apart from that, the actor-director duo has collaborated for Mirza The Untold Story, Faraar, Ardaas, Ardaas Karaan, Manje Bistre, Manje Bistre 2, Daaka etc. The film is written by Rana Ranbir and it is produced by Gippy Grewal in association with his wife Ravneet Kaur Grewal under the banner of Humble Motion Pictures.
Acclaimed Indian actress  Divya Dutta will play the role of a mother in the film. Divya, previously worked in many Punjabi, Hindi, Malayalam and English Languages films. She was highly praised for her role as Ishri Kaur, the sister of Flying Sikh Milkha Singh in Farhan Akhtar starrer biographical sports drama film  Bhaag Milkha Bhaag and later received IIFA Award for Best Supporting Actress. Reportedly Gippy Grewal and Babbal Rai will play the role of Dutta’s sons in the movie. Further, the film also stars actor-comedian Gurpreet Ghuggi, Prince Kanwaljit, Vadda Grewal, Aarushi Sharma, Sameep Singh Ranaut and Raghveer Boli in pivotal roles.